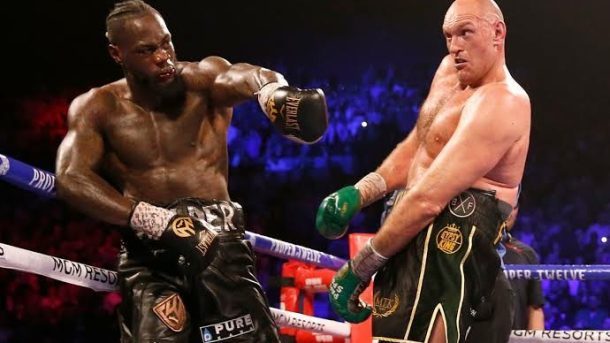 Tyson Fury has tested positive for coronavirus and his trilogy fight against Deontay Wilder has been postponed, according to reports.

An official announcement of the postponement has yet to come and tickets for the fight at the T-Mobile Arena in Las Vegas remained on sale earlier today.

Neither fighter has commented, although a positive test for WBC heavyweight champion Fury would point to there being little prospect of the July 24 showdown going ahead.

According to The Athletic, the Vegas gym where Fury has been preparing for the Wilder fight has been affected by a series of coronavirus cases, with “at least 10” people who have spent time there said to have tested positive.

Fury has a 30-0-1 career record, only failing to win in an initial meeting with Wilder in December 2018 that finished in a split draw.

But Fury knocked out the American in February 2020 to claim the WBC title, with a clash against British rival Anthony Joshua an apparently obvious next step.

A blockbuster clash with Joshua looked set to go ahead and it was pencilled in for August 14 in Saudi Arabia.

Wilder then won an arbitration hearing that stated he had the right to a third Fury bout.

This derailed plans with WBO, IBF and WBA strap-holder Joshua and Fury instead penned an agreement to take on Wilder once more.

Now, though, pending the expected confirmation of the trilogy fight being put back, hopes that Fury and Joshua could go head to head before the end of the year look to have been dealt a major blow.

Reports have said the Fury-Wilder fight could go ahead in October, possibly on October 9, with the previous Saturday at the fight venue booked out for an Alanis Morissette concert.