Popular Nigerian blogger and founder of the 360 group Noble Igwe on monday, 21st of Spetember has announced that he has just concluded the plans for an all expense paid trip for recently evicted Big Brother Naija lockdown housemate, Ozo.

IgbereTV reports that Igwe made the announcement on his his Twitter page. He stated that everything is set for Ozo’s trip to Cyprus. He also included that all expenses is taken care of. He also added that some people win in real life and there are still good people amongst us. 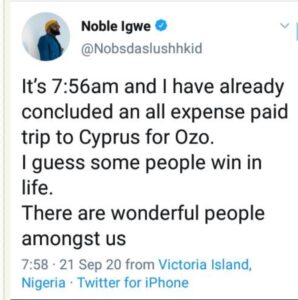 Noble Igwe was one of the biggest fans of Ozo and he has sought to console him with this gift after he was evicted.