Christian Eriksen is to be fitted with an implant to help to regulate his heart rhythm after suffering cardiac arrest during Denmark’s Euro 2020 match with Finland.

The midfielder was given CPR on the pitch during the first half of the match in Copenhagen last week before being taken to hospital, where he is stable. 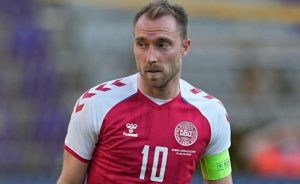 Denmark goalkeeper Kasper Schmeichel said on Monday that Christian Eriksen was “smiling and laughing”, while the Inter player himself thanked fans for their messages of support as he underwent tests.

On Thursday, the Danish Football Association confirmed specialists had recommended he be fitted with an implantable cardioverter defibrillator (ICD), a device that uses electrical pulses to regulate potentially dangerous heart rhythms.

A tweet from the FA’s official account said: “National team doctor Morten Boesen has been in contact with the cardiac specialist at Rigshospitalet and Christian Eriksen and this is the latest status.

“After Christian has been through different heart examinations it has been decided that he should have an ICD (heart starter). This device is necessary after a cardiac attack due to rhythm disturbances.

“Christian has accepted the solution and the plan has moreover been confirmed by specialists nationally and internationally who all recommend the same treatment.

“We encourage everybody to give Christian and his family peace and privacy.”

Professor Sanjar Sharma, an expert in sports cardiology, explained to Stats Perform the nature of the implant and the discussions Eriksen is likely to have over whether he will be able to continue his career.

“The question is, the aim is, this must never happen again,” he said. “To do this, they will probably be considering putting in something called an implantable defibrillator, which is a small device that lives under the collar bone with a lead in the vicinity of the heart. That lead monitors the cardiac rhythm day and night and should the heart go into a very dangerous rhythm called ventricular tachycardia, this lead detects it at the shock box and delivers a shock to restore a normal rhythm. That would be their main goal.

“Of course, their main goal would be to ensure he has another fifty or sixty years, which is what he should have at his age. Clearly, there will be discussions about where he goes from now as far as his career goes. And that will be determined from what they find.

“If they find something that is incurable such as a scar, if you have a lot of scarring, you can’t get rid of that, that’s there permanently. Or let’s say that they don’t find anything and his cardiac arrest remains an enigma, something clearly happened, we just haven’t been able to identify [it], it may be [it] happened in the spur of the moment, we haven’t found what caused it. In that particular situation, it’s very unreliable so you would have to tell him, this happened already once and it could happen again. The outcome may not be the same.

“You’ll probably find the medical fraternity would now be advising him, I would say probably not to compete. But in the United Kingdom certainly, we really do respect the autonomy of the athlete. The athlete has a massive say in their career. It’s not just that the doctor says ‘you will not train again or compete again’, the athlete gets involved.

“There will be a meeting certainly with the athlete, next of kin, and a club representative, talking about the possible scenarios, and then it may depend also on what Christian feels about his ongoing career, how his wife feels, how he feels about clearly bringing up the two children with this unpredictable risk. Lots of factors will come into this.”